It’s Friday night and I am sitting alone at home watching Rough Cut with Tommy Mac and eating a salad. My name is Mark Firley and I write a blog.

How I came to this sorry state of affairs is my story. I just drove back from Charleston, SC. While I was away, my wife went to the beach with her friend. It’s fine with me. They like the beach. I don’t. I knew I would beat her home. Not wanting to cook, I stopped at Panera Bread and picked up one of their healthy 1400 calorie salads.

I need to watch Tommy again for this blog. Research in the tradition of Edward R. Murrow. I was watching Tommy’s pine chest episode. He was making a six board chest. His “road trip this week was to the Tremont Nail Co. in Mansfield, Mass to see how traditional cut nails are made. Being an authentic copy of a six board chest, he was using wrought nails.

Tommy’s explanation of a sprung joint was similar to Graham Blackburn’s although Tommy is closer to David Charlesworth. Tommy and David both have distinctive hair flips. Some of his joinery techniques are not what Roy would do but then he only has a 24 minute show. My major complaint was that after staying fairly close to the spirit of the form of the boarded chest, he went and added a gate handle. I have seen hundreds of boarded chests. I have seen very few boarded chests with handles. And none with gate handles.

Tommy and his chest. He calls them boot jack ends, others might call them ogee (or cyma). Click to see the gate handle.

I took the boarded chest class from Chris Schwarz at Roy Underhill’s Woodwright’s School. I really didn’t need to take the class. I have built several boarded chests on my own. I just took the class to see if I could make it through one of his classes without bursting into tears. Chris always picks on the big guy. (This is not actually true, just true enough. I need it for the narrative.)

Being a non-conformist and malcontent (but not an anarchist), I decided that for this class I wanted to reproduce a chest I had seen at an outdoor antiques fest with wooden hinges. I’ve done lots of strap and butt hinges but never wooden hinges. Mr. Schwarz acquiesced having learned it’s easier than arguing.

The remains of the wooden hinge on the chest that I chose to reproduce. The appearance of the hinge shows me that failure is always an option. Click to see a front view of the chest.

The class went well and I survived the abuse. I worked a few hours at home to make the wooden hinges. I mostly finished the chest in class. It took me a few hours of work at home to finish the chest but finish it I did. I think it turned out fairly well.

I painted it coastal blue. Federal blue would have been another choice but coastal blue was closer to the original. Click to see other views.

And this is how the chest is being used: 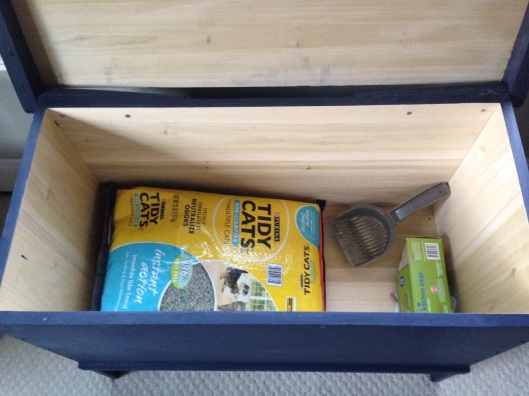 It found a purpose. Humble but important. 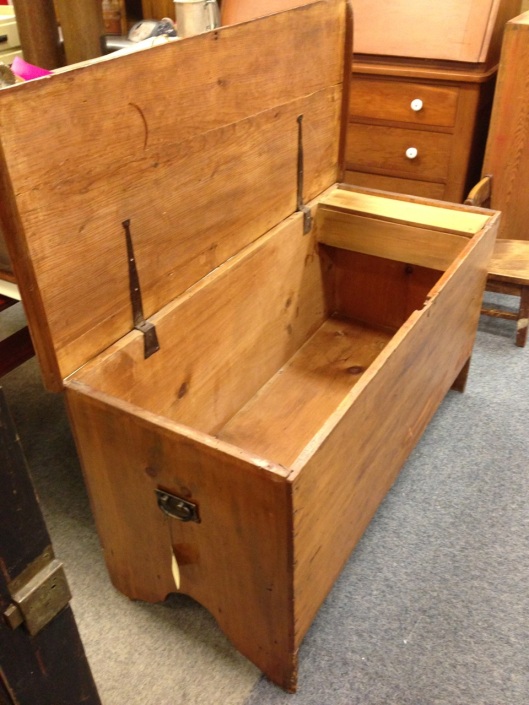