Unless I get to back next year. Then there will be more. I’m sure there are things I have missed as well as new things to see. I hope I go back. There might be some pictures similar to last year but I assure you they are worth a second look. It might be a new interpretation. I know more than I did last year. I’m not on the down slope yet. Here is a shot of some beds in one of the cabins:

Beds for every need.

I know I took pictures of this house last year but it is very picturesque:

Makes you want to move in, doesn’t it?

More on that below.

This is a wild desk from within the museum itself:

I will avoid the obvious comment about the stiff at the desk.

And since I haven’t shown one in a while, a gout rocker of a slightly more rustic form: 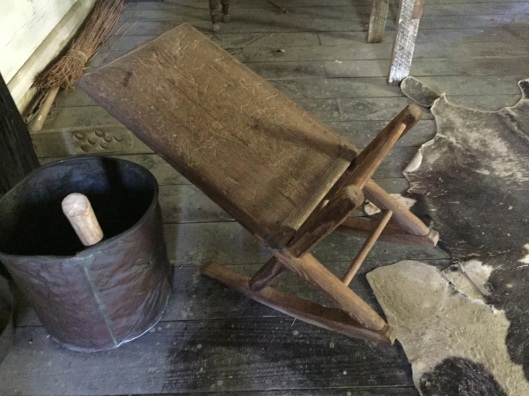 They must have had less than healthy diets in Louisiana.

To see the last of my Rural Life Museum pictures, click HERE. I did notice one disturbing thing wandering the museum grounds. It seems innocent enough:

Cam-Lok connectors. Like snakes in the grass. What can it mean?

Everywhere I looked, there they were:

If you look closely, you can just seen them.

If you foolw them long enough, you will find the hidden electrical distribution box:

I have been involved in the entertainment industry since 1976 and spent 14 years as vice president of a television/film lighting rental company. I can read the signs. I know what this means. There is a film crew lurking somewhere in the area. All the subtle signs were there. That and the tents and trailers near the big Crew Parking sign. On the way out I asked what was going on and was told they filming (taping?) portions of the WGN America television series Underground (2016) on the grounds. Underground is a slavery era-set drama revolving around the Underground Railroad.

They didn’t even have this tape until the late 1890’s.

And finally finally, I neglected to mention one post in my list of Rural Life Museum blogs from last year:

LSU Rural Life Museum, Something for Every Budget

3 thoughts on “Last Pictures From the Rural Life Museum”