Due to the excitement from The Eclipse Event of 2017, I wasn’t sure I would be able to do a blog today. Locally, the eclipse was only partial enabling me to recover more quickly than expected.

Wandering through my favorite auction gallery, I came across this piece:

And the geometric banded inlaid edge.

I opened one of the drawers with end-grain veneer and barber pole banded inlay and was surprised to not see dovetails. My first thought was the applied cockbeading might be covering the dovetails, but that was not the case. It is unusual for a table of this quality not to have dovetailed drawers. Rare but not unheard of.

Look Ma, no dovetails!! But there are nails.

Looking for more construction details, I pulled out the other drawer:

There be dovetails here!

Dovetails at both ends of the drawer.

I checked the opposite side of the first drawer and found dovetails:

Dovetails on this side of the first drawer.

I went back and looked at the first side of the first drawer and found that:

There probably were pins. You can see the pin residue between the cockbead and the drawer side.

I’m figuring the thin pins failed and the drawer side was replaced with one nailed on.

There was another piece there that I ignored at first:

Condition: Later top; some inlay loss and other restoration.

I had ignored it because the top looked too new and was glued up from several narrow boards. The top had no profile or decoration applied, just a plain edge, similar to today’s Bassett or Ethan Allen furniture.

Just to validate my dismissal of this server as new, I looked at a drawer and saw this: 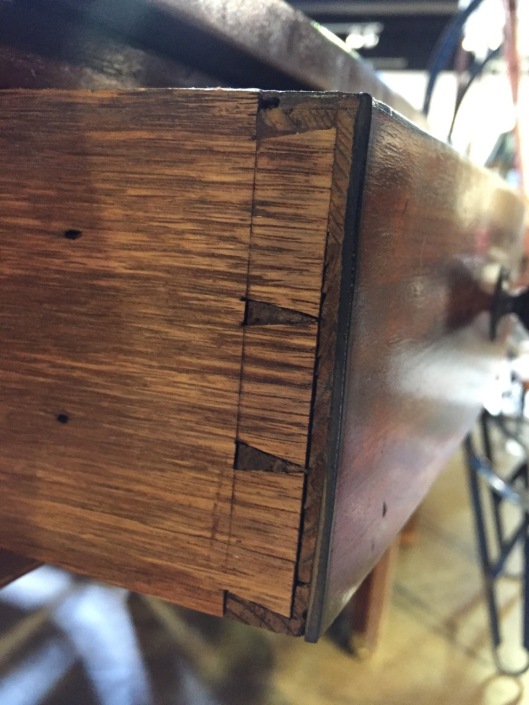 Not at all what I expected.

That’s when I checked the catalog and saw that (part of) it was 200 years old.

I liked the pull, even if not original.